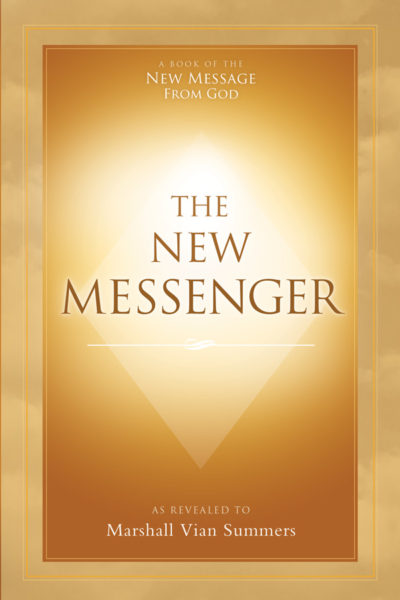 The New Messenger is a book of revelation regarding the origin, lineage and mission of the Messengers of God who, at different times in human history, have entered the world to receive and present New Revelations for humanity.

The New Message teaches that all the former Messengers of God were members of the Angelic Assembly who oversee the world. Across history, this Assembly, in response to the Will of God, has sent into the world one of their own at specific times and places to serve the growing needs of humanity.

The coming of a New Messenger represents the next chapter in the progressive Revelation of God’s Will and Plan for humanity. Now God has spoken again, revealing what has never been revealed before, speaking through a New Messenger, a man named Marshall Vian Summers.

The New Messenger contains those revelations from the Source concerning the Messenger himself. Who is he? Why was he chosen? How can you know that he is real and authentic? And how is he connected to the Messengers of the past?

These are questions that all people of good faith may ask. Now God has spoken again with a series of revelations to elevate our understanding of God’s Messengers, their selection, their greater identity, their relationship to one another and the consequence of their appearance and emergence in the world.

Each chapter of The New Messenger is an individual revelation given from God to humanity. Here you have an opportunity to truly understand the man, Marshall Vian Summers, who has been the recipient of over 9000 pages of revelation of the New Message from God. The Voice of Revelation continues to speak through the Messenger and the Word and the Sound of God’s communication is now being heard around the world. The Revelation continues to this day.

The New Messenger is the third book of Volume 1 of The New Message from God.

More about the volumes of the New Message from God

Reviews for The New Messenger